Brad Osborne’s poem over at commonsensiblyspeaking brought whispers of Lloyd Alexander, Tolkien, Cornwell, Kipling, and even Beowulf to my mind. Check it out!

Over the gnarled boughs

Weathered by the voice of years

And traced in the wounds

Burnt in the sepia lost

And placed within the tombs

With a farrier’s skill

Bodies of the broken

Now echoes in the gloom

As you know, I recently discovered an organization called Veterans Referring Veterans. This group exists to help veterans support and promote each other’s business and reach new customers through online networking. I have been delighted with what I have seen so far.

Each Thursday night, we have a Happy Hour with a veteran presenting something about his or her business, followed by open questions and discussion. I have met veterans who run companies selling maple syrup, clothing, metal-working projects, jewelry, and wood-working products. I met the author of a series of children’s books. And I have met financial, marketing, business consultants, personal coaches … you name it.

I even met a veteran who’s father is a famous wood-worker who did a great deal of wood carving for Disney and who has carvings all over the world, many ordered by well-known celebrities. He did not follow in his father’s footsteps, however. He is the children’s book author I mentioned above. The point is, I have meant some fascinating people.

Last week, the presenter was a member of the Four Brothers Mead business partnership. This team, consisting of two blood brothers, a brother-by-marriage, and a brother-by-combat, decided to make mead for family gatherings. They really got into it and came up with an excellent product. Demand increased, and they decided to go for it. It is a great story.

These guys, at least two of Nordic ancestry, follow the same recipe that has been used to make mead for over a thousand years. They use all local honey and no artificial ingredients. They do offer flavored varieties, such as blackberry, to which they add a few, you guessed it, actual blackberries. They offer a maple version, the one I ordered, to which they add just a little maple syrup from a veteran-owned maple farm in Vermont (but that is the subject of a future blog post). And it is simply outstanding!

They will soon be offering a bourbon-flavored version. Nothing added – just aged in old charred-oak bourbon barrels. Being an aficionado of good bourbon, I can’t wait for this one to come out.

Anyway, if you want to try something different, I can definitely recommend the YGGDRASIL SAP! And, if it is any kind of an indicator, the other versions will be excellent as well.

Yes, I do have an author’s newsletter! Would you like to keep up with new releases, writing tips, upcoming events, freebies, and bonus content? Then you can sign up by clicking here! And, I promise, no spam!

In a thrilling adventure of brotherhood, warfare, and treachery, Giles Kristian takes us into ninth-century England, a world of darkness, epic conflict, and an unforgiving God served by powerful priests. On ships shaped like dragons, bristling with oars and armor, Jarl Sigurd and his fierce Norsemen have come in search of riches. And riches they are promised, by an English ruler who sends Sigurd and his wolves to steal a holy manuscript from another kingdom. Osric, an orphan boy, sees beyond the terror of these warriors, and somehow knows the heathens’ tongue. Renamed Raven, rechristened in blood, he will join them. They are his people. And they will be his fate.

Set in England during the late 800s, “Blood Eye” is the story of Osric, a fifteen-year-old carpenter’s apprentice in the village of Abbotsend. Osric has no memory of anything before the Saxon villagers found him left for dead near a burial mound with a bone-handled pagan knife hanging around his neck. To make matters worse, Osri’s left eye is blood red (probably from an injury), so the Christian priest accuse him of being a servant of the devil. This makes Osric’s life in Abbotsend difficult. Things change dramatically when two Viking long-ships arrive on shore.

The Vikings are led by Jarl Sigurd who claims to have come peace to trade, However, the village priest attempts to poison Sigurd with mead laced with hemlock. Osric cannot simply standby and let this happen, so he warns Sigurd about the priest’s treachery. The Vikings take their revenge, and leave, taking Osric and the old carpenter with them. Sigurd believes Osric’s “blood eye” is a sign from Odin. Osric soon discovers he has much more in common with Sigurd and his men than with the English who adopted him.

Sigurd renames Osric “Raven,” and the boy finds himself admiring the Norseman and their way of life. He has discovered he can speak their language, and with the pagan knife, this presents a clue to his forgotten past.

The story begins to take off when a Wessex Ealdorman offers Sigurd a fortune in silver to steal a book, a bejeweled Gospel of Saint Jerome, kept in the fortress of the king of Merica. The Norseman agree and set off on this mission accompanied by a fierce Wessexman named Mauger and an Christian priest named Father Egfrith.

In Mercia, Raven helps save a young woman named Cynethryth, who becomes Raven’s love interest for the remainder of the tale. While there exists a thread of romance, this is not a romance novel. It is a Viking saga of honor, courage, battle, and blood. It is the story of Raven and his return to his origins, and discovering himself in the company of Viking warriors.

The story moves at a fast pace from one exciting battle scene to the next. It includes several good plot twists and a large dose of betrayal and comeuppance.

Giles Kristian ends his tale in a way that sets up the sequel, Sons of Thunder perfectly, and I look forward to reading that tale next.

The interesting thing for me is that I read the Rise of Sigurd series previously, which is clearly a prequel to this Raven series, and was written a few years later.

As a new author myself, it was interesting to see how Giles Kristian has grown as an author over time. It looks like there were about three years between the release of Blood Eye (Raven 1) and God of Vengeance (Sigurd 1). The growth of Kristian as a writer between the two works is readily apparent. God of Vengeance is much smoother and better written.

I find that inspirational because it means there may actually be hope for me as a writer. And, indeed, I learned a great deal writing my first novel, Serpents Underfoot and already see differences as I continue working on its sequel, Montagnard.

I found “Blood Eye” to be a very worthy read, and I do recommend it (with the understandings mentioned above) as a very good read. I think it would be interesting to re-read them in the order they were released, and enjoy the great stories while seeing Kristian’s evolution from good new author to excellent seasoned author unfold. 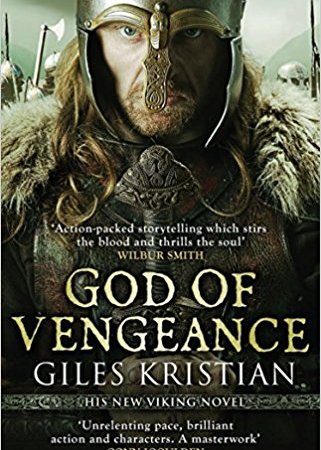 The first of a series, God of Vengeance takes place in Norway in 785 AD. The story begins with the betrayal of a lord by his king. An ambitious King Gorm betrays his oath-sworn warlord, Jarl Harald, and puts his family to the sword. However Gorm makes one fatal mistake … he does not kill Harald’s youngest son, Sigurd.

With his kin slain, his village seized, and its people taken as slaves, Sigurd wonders if the gods have forsaken him. In addition, he is now hunted by powerful men, and Sigurd has only a small band of loyal followers at his side. However, with them and with the help of the All-Father, Odin, Sigurd will make King Gorm pay with his life for his treachery. Slowly, Sigurd gathers together a band of loyal and battle-tested warriors; a band that includes his father’s right-hand man Olaf, Bram (a bear of a man), Black Floki who wields death with any blade, and the fierce shieldmaiden. Valgerd, a warrior who fears no man on earth. Whether Ódin is with him or not, Sigurd will have his vengeance. And, neither man … nor the gods … will stand in his way.

God of Vengeance is a good Viking tale. Giles Kristian has a great understanding of Viking history, culture, religion, language, and warfare. He manages to convey it all in a compelling if somewhat predictable, story. As a result, there is a great deal of authenticity in this book and Viking fans will love it. Kristian captures the Norsemen’s fatalistic sense of humor perfectly and the dialogue is very good. I enjoyed the comradery and how the characters were constantly quipping, insulting each other and egging each other on. That tradition is very much alive in the true warrior branches of the U.S. military today. The reader will really get to know most of Sigurd’s crew and will be vested in their respective fates.

God of Vengeance is a must-read for all who enjoy thrilling, action-packed fiction in the manner of Bernard Cornwell or George R R Martin.