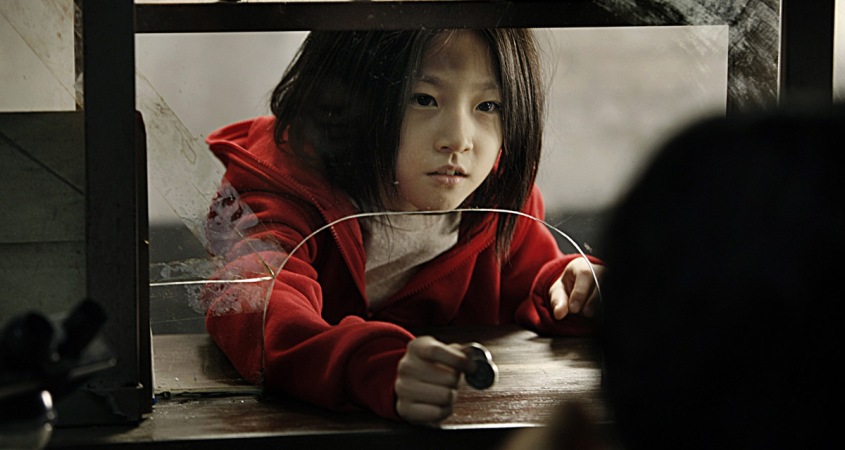 A young girl, a lost soul, redemption, and an epic knife fight! Who could ask for more?

In this 2010 Korean film, a quiet pawnshop clerk with a secret and violent past takes on a drug-and-organ trafficking ring in hope of saving the child who is his only friend.

Cha Tae-shik’s only connection to the world is a little girl named Jeong So-mi, who lives next door. Her mother, Hyo-Jeong steals drugs from a drug trafficking gang and hides the drugs in Tae-shik’s pawnshop without his knowledge.

The drug smugglers discover her theft and kidnap both Hyo-jeong and So-mi. Tae-shik is suddenly yanked back into the world he has been hiding from in a frantic search to find So-mi. In order to save the girl, he makes a deal with the drug-and-organ trafficking gang, but is set up to take the fall for Hyo-jeong’s murder.

So-mi is still nowhere to be found and the clock is running out for the little girl. And to make matters worse, the police are now after Tae-shik. With both the police and the gang after him, Tae-shik’s hidden past is slowly revealed, and it is beginning to look like he may be too late to save So-mi.

I love this movie and have watched it several times. It is filmed in Korean, and I watch it with subtitles. I tried watching it dubbed in English once, and well, I just hate it when the moving lips don’t match the words. But, that’s just me.

There are a few places in which this movie is a bit tricky to follow, which is why I originally watched it a second time. I guess now, I have seen it four or five times over the years.

The martial arts action scenes are extremely well done, and near its end, this film boasts one of the best cinematic knife fights to ever hit the silver screen!

The film is a bit graphic and for those who don’t like realistic violence, it may be a bit hard to watch. However, it is not overdone … just real. It will also take you through an entire gambit of human emotions. And for me, at its core, I think this is a terrific film about human redemption, although perhaps in a more secular form.

I used to stream this on Netflix, but it is no longer available from them, so I ordered a DVD from Amazon.com. I wanted to check out the epic knife fight scene again as research for a knife fight scene I am writing in my upcoming sequel to Serpents Underfoot, the sequel is titled Montagnard.

I understand The Man from Nowhere is now available to stream from Prime Video where it is Amazon’s Choice for Korean films. If you like realistic action, drama, martial arts, and foreign films, this is a movie for you!

This Sunday also just happened to be September 11,2011 and the 10th anniversary of the attack on the world trade center in New York City.  In church I listened to a sermon by Reverend Joe Minarik that talked about forgiveness versus vengeance.  It was a well thought out sermon and I did enjoy listening to it, and it is often very true that some people mistake revenge for justice.  We all need to find forgiveness in our hearts for those people who have offended us … or how can we expect God to forgive us?

How does that translate to September 11, 2011 and the actions this government took to punish the perpetrators of that heinous attack?  Did the U.S. seek revenge or justice.  Does forgiveness mean there is no consequences for evil actions?  Can we forgive those who do us wrong and still expect justice?

Consequences are sometimes necessary for us to learn … and I would say it was justice that most Americans sought after 9/11.  Not revenge!  Revenge would have been the indiscriminate murder of 3000 muslim innocent men, women, and children.  That did not happen.  Though we can argue about whether what we did was the right thing, anyone of sound mind and intellect should be able to accept that it was measured, restrained, and that every attempt was made to only go after Al Qaeda associates and their supporters.  We did not Nuke the Middle East.  I think my thoughts on Iraq should be clear from earlier posts, and yes, even Obama stated that Afghanistan was the “right war to be fighting” to achieve justice for the victims of the World Trade Center bombing.

Sometimes I get the feeling that some people do not mistake vengeance for justice, but instead they mistake justice for vengeance.  “vengeance is mine … saith the Lord” is often quoted by certain Christians as an exhortation to stand by and  to do nothing when horrific acts or events are playing out.   To me, Jesus’s lesson of “turning the other cheek” is not an admonition to go meekly to the slaughter … it is the defiant act of a warrior.  It clearly says, “that slap didn’t faze me … would you like to go for the other cheek as well!”  I have never bought into the Marvin Milktoast version of Jesus Christ.  Marvin Milktoast could not have survived 40 days in the desert,  run the money-changers out of the temple, faced down Satan and demons, or endured the suffering Jesus endured during his crucifixion.  Jesus was a warrior … like David or Sampson …a warrior for God … with a keen understanding of where and when not to use force or violence.

God gave us as sense of right and wrong, a free will, and a thinking mind!  The belief that “divine intervention” is the only biblically correct means to stop the evil acts of others is simply a cop-out and an excuse to avoid personal responsibility.  I am reminded of a story about a pious man sitting on his roof as the flood waters rose about him.  A truck came by and his neighbors shouted for him to climb in;  they were headed for higher ground.  He refused their help, saying that he had faith God would rescue him.  The water kept rising.  A boat came by and the rescuers hailed the man.  Again the man refused rescue saying that he was waiting for God to come and save him.  Still the water kept rising.  A helicopter flew overhead and tried to lift the man to safety.   Again the man refused, yelling that God would save him. The water continued to rise.  Sometime later the man stood at the Pearly Gates and Peter opened them to let him in.  The pious man, his faith shaken and feeling somewhat miffed, asked Peter why in Heaven’s Name God had not come and rescued him?  Why did God let him drown?  Peter looked at the man and said, “Sorry. God was sort of busy that day.  However, he did manage to find the time to send you a truck, a boat, and a helicopter.  Why did you not jump on one of those?

While violence is and should always be the last resort, the fact is that if only evil men are willing to use violence, only evil men will win.  Here are a few quotes I like:

“An unwillingness to deal forcibly with violence does not equate to moral rectitude!”

“Freedom is the sure possession of those alone who have the courage to defend it!”

“The only thing necessary for the triumph of evil is for good men to do nothing!”