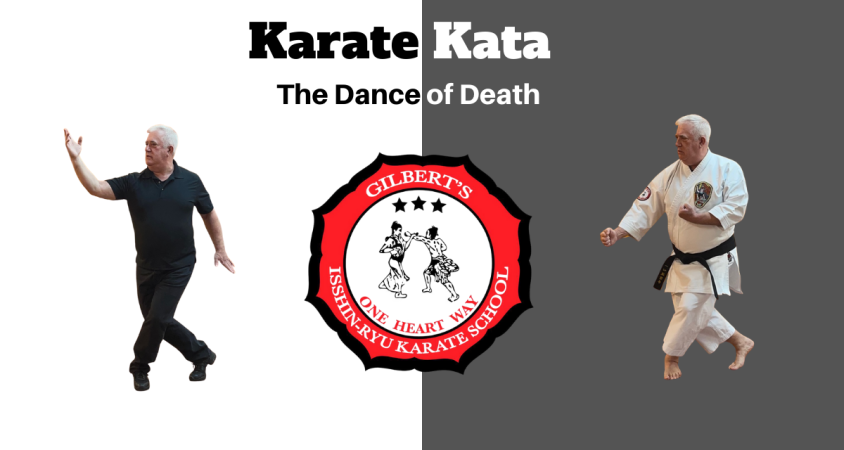 Now, I am not talking about some of the highly sensational “stuff” that has come out over the years. There are many books out there by such prolific “martial arts” writers as Ashida Kim talking about Count Dante and others, claiming that The Dance of Death is the most deadly collection of “poison hand” techniques known to man. There are also several “martial arts” genre movies that have been released using versions of the phrase “Dance of Death” in their titles. All I am going to say about that martial arts “pulp fiction” is, buyer beware.

But in general, I think you could consider a kata to be a form of dance. It is a series of movements combining concepts such footwork and stances, proper posture, presence, balance, flow, relaxation, dynamic tension, etc. They have a certain rhythm which can vary as skill grows or even depending on what the practitioner is thinking technique-wise. And, you could easily receive a description such as this from a karate instructor – or a ballroom dance instructor.

Ballroom dance and karate both require years of practice to achieve real skill. Both require the study of and understanding of body mechanics, timing, breathing, distance, technique, and posture.

Both require a great deal of time spent practicing basic techniques, simple patterns, and advanced choreographed movements, the mastery of which later allows the skilled practitioner to forget the patterns and to allow his own expression of technique or dance to flow.

The similarities do not end there!

For both karate and ballroom dancing, a good instructor can make all the difference in the world. I first started out learning basic steps from instructors that were essentially a few lessons ahead of me. Having studied karate with a few excellent instructors, I soon became bored with this level of teaching. I wanted more.

Then I met Mark and Rhonda Becker at Champion Ballroom in Knoxville. This husband and wife team are both great instructors. They did not teach steps – they taught you the art of ballroom dancing.

That was when the similarities between karate-do and ballroom dancing began to really show.

So, are karate kata really a dance of death?

Well, if you consider that a traditional karate kata has so much in common with a dance, and then take into consideration what a kata contains, I would say the answer is – yes.

What is a kata? It essentially is a collection of effective and proven combat techniques distilled down to their purest form. Like a dance, they require balance, breath control, timing, focus, proper body mechanics, and flow.

They also require understanding. Many of the techniques, while they certainly can be modified, if executed to their fullest potential, have disastrous effects on the human body. Many can, indeed, be fatal.

So, from that perspective, I guess they could be called, “The Dance of Death.” But they are so much more than that.

Preforming kata is a great form of exercise. And depending on how you work them, you can achieve a great variety of results. You can blast through them as a good cardio workout, or you can perform them slowly to work on balance and strength. You can work on timing your breathing to techniques or utilize dynamic tension. Then kata can become moving meditation and help you improve your focus, or relax and reduce stress.

It’s almost like a Yin Yang relationship, isn’t it?

Check out my books on my Amazon Author’s Page …

There are several to choose from, all with great reviews.

And let’s stay in touch! Sign up for my monthly author’s newsletter …

Sign up by clicking the button below and receive a free gift! And, I promise, no spam! You can easily unsubscribe at any time.

I was a huge Van Halen fan in the 70s and early 80s. I even liked some of the stuff they did when Sammy Hagar joined them. But, I much preferred the David Lee Roth period. Their self-titled first album shook the entire music universe.

Since the passing of Eddie Van Halen earlier this month, the internet is full of tributes, covers, memories, and concert footage. I was sifting through some of that when I discovered this gem! Eddie Van Halen lived the American Dream, rags to riches, putting in the sweat and hard work to succeed at his dream.

Filmed for Jimmy Kimmel Live in 2015, nine early Van Halen songs clearly illustrate why Eddie Halen was perhaps the best. This video features David Lee Roth reunited with the band! Alex Van Halen is on the drums, and Wolfgang Van Halen, Eddie’s son, is on the base. And … this video ROCKS!

As one fan put it so eloquently …

Don’t cry because he’s gone,
Smile because he was here.
And we were fortunate enough to witness it

The sound that started it all.

I was sitting in the back seat of a buddy’s Camaro, the Craig Powerplay combined with Jensen Triaxial speakers crushing my eardrums when the cassette tape changed. The next thing I heard was this!!

“Who’s the guitar player?” I asked.

Turns our Eruption was simply Eddie’s warm-up exercise. Someone overheard him playing it to warm up and insisted that it was put on their first, self-titled, album.

This post is about Van Halen, and I am focusing on the original Van Halen with David Lee Roth. I always liked Sammy Hagar as well, especially in those early years with Montrose, etc. The Red Rocker could certainly rock. But even though Van Halen turned out some great music with Sammy Hagar fronting for them, it was just not my thing. I was never a big fan of Van Hagar.

Part of that may stem from a Van Hagar concert I went to in Knoxville, Tennessee, in the late 80s. The girl I was with and I got to the concert, and there was a huge banner up behind the stage that read “BLANK OFF ROTH.” Of course, it didn’t say BLANK. We just left; it ruined my whole experience.

From 1974 until 1985, Van Halen consisted of Eddie Van Halen (guitar), Alex Van Halen (drums). Michael Anthony (bass), and David Lee Roth (vocals). Van Halen was one of the most successful rock bands of the 1980s and is credited with returning hard rock to the music world’s forefront. The album 1984 sold over 10 million copies in the U.S.

Unfortunately, the sound quality of most of the live video of Van Halen is just not that great, so I am using remastered videos for most of the post.

Dance The Night Away (1979 Remastered)

Van Halen did have more commercial success with Sammy Hagar, scoring four U.S. number one, multiplatinum albums, and yes, a lot of the music was really great. I guess I just never got over that banner. And there was another difference for me. David Lee Roth was very clever with the sexual innuendo often found in Rock music (after all, rock and roll was simply another term for sex in the R&B world where it finds its roots), but Roth never really beat you over the head with it. Sammy Hagar was simply in your face with it. To me, it was just a lot less classy.

Van Halen was inducted into the Rock and Roll Hall of Fame in 2007.

Eddie Van Halen, widely considered one of the greatest guitar players of all time, lost his battle with cancer on 10/6/2020. RIP.