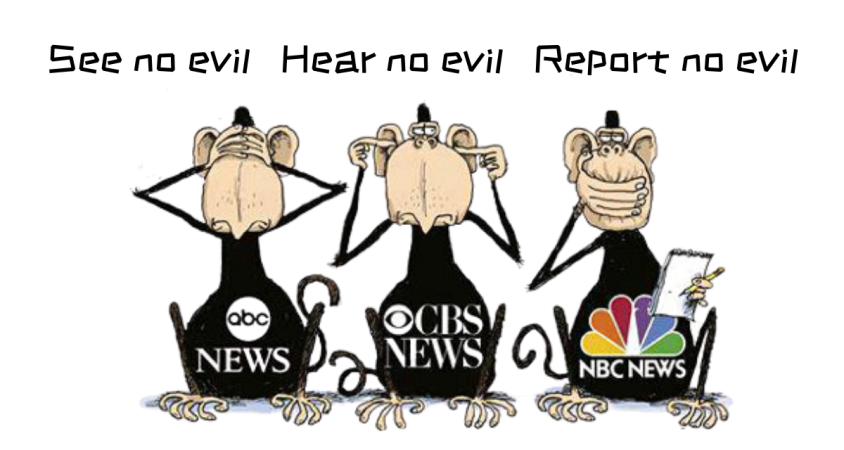 And yes, that includes CNN, MSNBC, and sadly, many on Fox News as well!

Here are a few more thoughts on the 2020 election!

Data is now coming in that is proving criminal fraud in the 2020 Presidential election! Much of this data is simple math and does not require video surveillance, an eye-witness account, or a smoking gun.

Perhaps that is why the Arizona Supreme Court has consented to hear Trump’s case, and why Texas has asked the U.S. Supreme Court to rule four battleground state elections unconstitutional. Evidence is becoming so blatant it can no longer plausibly be ignored.

In sample after sample, Biden’s victory just doesn’t add up. I wonder why that is … ?

It is because decisive, targeted, and non-ubiquitous election fraud occurred on November 3, 2020!

This fraud was not actually “wide-spread” in the way we understand the term. It was very targeted, with only six locations being used. However, if these six locations were flipped, it would flip these “swing states” and their electoral college votes.

The reason they got caught is that Trump was on his way to an easy win. Do you remember what the election counts were when you went to bed? Trump was way, way ahead. This forced the cheaters at these six locations to go full-on criminal by intimidating observers, taping newspapers over windows, reporting a leaking toilet as a “water main break,” and shutting down counting and then immediately restarting once Republican observers had departed. However, the sheer number of votes needed also broke the algorithm because they needed too many “fraudulent” votes to ensure Biden won, and it became obvious to anyone willing to look. If the numbers had been much closer when we went to bed, they probably would have gotten away with it. And sadly, because of the swamp, they still might. That would be bad.

And this is why the left isn’t calling for transparency, audits, or open communication to build confidence in the electorate. It is exactly why they are obfuscating, playing legal games, defying court orders, and howling in the press that it is all over.

Ask your self, is this the behavior of a group that won an election fair and square?

It is unbelievable, yes! But it is also all documented, cited, and sourced. Of course, it won’t matter if you’ve already OD’d on the Kool-Aid.

And while I am at it, here are my thoughts on mask mandates …

From a recent messenger chat with a friend. The friend’s name has been omitted out of respect for his privacy and the chat message slightly edited for clarity …

#####, my comment was somewhat “tongue in cheek” and was in no way directed at you or anyone else who uses caution and common sense in avoiding contracting or spreading disease. I wear a mask when it is appropriate. But I don’t see anyone in this group blindly following the commands of little dictator wannabes!

I have seen too many examples of dictatorial nonsense and imperial edicts enacted on Americans by Democrat elitists with little thought or basis in science or fact to have much patience for more of the same. They are simply using coronavirus as a justification. Even this massive mail-in voting push and the chaos it has caused was justified by the media perpetuated COVID panic. This was not a coincidence. This is being used as a vehicle for all kinds of agenda-driven power grabs. This is made especially clear since these edict issuers do not follow the very rules that they demand we follow. Pelosi, Gavin, Whitmore, and Fauci are just a few examples recently in the news (if you look beyond CNN and MSLSD). More finite examples are everywhere if you only look.

For instance, you can safely board and fly on a plane with a mask on, but you can’t safely go to church wearing a mask? You can take a sailboat out on a lake in Michigan and be safe from COVID, but you’re not safe in a powerboat? A family can drive to a golf course together in a mini-van, but once there, they all have to ride in separate golf carts? Explain the science behind that to me. Or, is it just more agenda-driven erosion of our rights and working toward Hillary Clinton’s stated goal of a more “compliant citizenry.”

So, while I will not blindly submit to imperial edicts like unenforceable mask mandates issued by the US’s agenda-driven domestic enemies, I will wear a mask when appropriate to protect those I care about. But it will be my decision as a free American to do so. That is how it must be because once you give up your freedom, it is typically a bloody mess (civil war or revolution) to get it back. I believe this is how most Americans should feel, and I suspect how you feel.

Well, maybe except Biden, who I assume probably wore his mask while sitting alone in his basement.

So, I am done with political rantings … at least for a while. I am not particularly sorry if this offends anyone. Our country’s welfare and the integrity of our election system and system of government are at stake here!