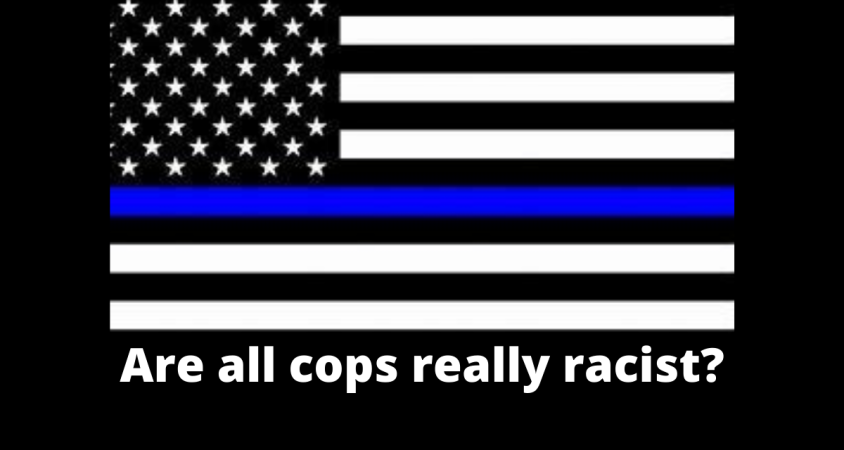 A friend of mine sent me a message a few days ago containing some random ideas on cause and effect, trends, and his conclusions. His thoughts got me thinking about several things, and I decided to do a little research and explore a few of his ideas. After doing a little digging, I then decided to share a bit of what I found in a short post. I may explore a few more of his musings as well. This one turned out to be interesting.

Sensationalism in the media has finally stirred enough pots so now we have an entire cross-section of society that believes police target minorities.

Do the police actively target minorities? We hear about it from the mainstream media, groups like BLM, and Left-wing politicians all the time. I have heard some statistical claims by some that I know are complete nonsense because I am interested in these things and do quite a bit of research myself.

Unfortunately, most people with an ax to grind, start with their belief, and then search for statistics to back it up. In addition, they will often take statistics out of context and completely ignore any statistics that do not support their belief. This is intellectually dishonest.

An intellectually honest person forms their belief based on the information the statistics provide.

You also have to understand the context in which the statistics exist. Many today, especially in the media and the radical Left, choose to ignore the background of the statistic they happen to be quoting at the time and instead choose to focus on that all-important “bumper-sticker” slogan or attention-grabbing headline rather than FACTS.

And too often, it seems, they continue to quote statistics that have already be debunked by well-respected research groups, think-tanks, and institutions of higher education.

But what is the truth …

The Bureau of Justice Statistics keeps and provides data on public interaction with police. The latest BJS figures are from 2011 and comprise the latest, most extensive, and accurate data set available.

This demographic breakdown of traffic stops by police officers very closely tracks the demographic makeup of the population. It does not show any propensity for the over-policing of minority populations.

A study by a Harvard professor released in 2016 found no evidence of racial bias in police shootings even though officers were more likely to interact physically with minorities than whites.

Mr. Fryer, who happens to be black, told The New York Times that the finding of no racial discrimination in police shootings was “the most surprising result of my career.”

The 63-page study, “An Empirical Analysis of Racial Differences in Police Use of Force,” appears to support research conducted at Washington State University showing that officers in simulation tests were actually less likely to shoot at blacks than whites.

This does not surprise me since if you are a cop and you are involved in the shooting of a black suspect, you will be publicly charged with felony murder before any investigation is even launched, never mind completed.

The Left, failing in several coup attempts since the 2016 election, has simply now revived the anti-police rhetoric of the Obama years

Biden’s criminal-justice plan promises that after his policing reforms, “black mothers and fathers will no longer have to fear when their children ‘walk’ the streets of America” — the threat allegedly coming from cops, not gangbangers.

President Barack Obama likewise claimed during the memorial for five Dallas police officers killed by a Black Lives Matter–inspired assassin in July 2016 that black parents were right to fear that their child could be killed by a police officer whenever he “walks out the door.”

South Bend mayor Pete Buttigieg has said that police shootings of black men won’t be solved “until we move policing out from the shadow of systemic racism.”

Beto O’Rourke claims that the police shoot blacks “solely based on the color of their skin.”

I have to admit, it’s enough to scare the proverbial crap out of anyone, especially if you are American who happens to be black! But is it accurate?

Another point to consider …

In 2016, the Obama administration recommended that all police departments lower their entry standards to qualify more minorities for recruitment. Many departments had already reduced reliance on written exams and eliminated requirements that recruits have a clean criminal record (Does anyone else see a problem with this one especially). These practices intensified after his administration’s suggestion.

The PNAS warned that these efforts would not reduce racial disparities in shootings.

Whether lowered hiring standards are responsible for those disparities was not addressed.

A study by Michigan State University and the University of Maryland at College Park show that police actually do not target minorities!

A study published in 2019 by the Proceedings of the National Academy of Sciences demolishes the Democratic narrative regarding race and police shootings. While the radical Left claim that white officers are engaged in an epidemic of racially biased shootings of black men, it turns out that white officers are no more likely than black or Hispanic officers to shoot black civilians. It is a racial group’s rate of violent crime that determines police shootings, not the race of the officer.

The more often officers encounter violent suspects from any given racial group, the higher the chance that members of that racial group will be shot by a police officer. In fact, the study found that if there is a bias in police shootings after crime rates are taken into account, it is against white civilians.

This study looked at 917 officer-involved fatal shootings in 2015 from more than 650 police departments. Fifty-five percent of the victims were white, 27 percent were black, and 19 percent were Hispanic.

The Black Lives Matter narrative, however, remains impervious to the truth

The truth is, the persistent belief that we are living through an epidemic of racially biased police shootings is a creation of selective reporting on the part of the media.

In 2015, a PNAS study addressed white victims of fatal police shootings that included:

I suspect that had any of these victims been black, the media and activists would probably have jumped on their stories and added their names to the roster of victims of police racism. Instead, because they are white, they are unknown.

I hope you will take some time to check out some of my other “blog posts by clicking here!

And if you enjoy reading a good action-adventure story, check out my new novel, Montagnard, on Amazon.com! It’s getting a lot of great reviews.