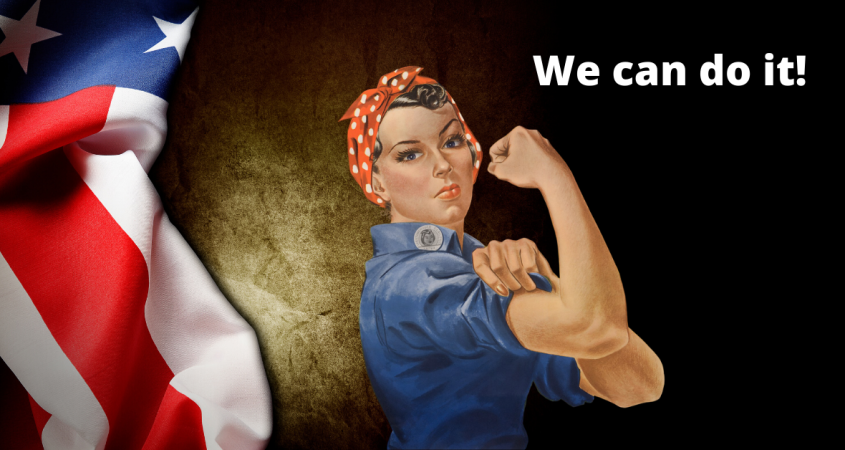 Rosalind P. Walter, the first “Rosie the Riveter,” died at the age of 95 on Wednesday in New York City.

Walter grew up privileged in a wealthy Long Island home. However, when the United States entered World War II, Rosalind joined millions of other women in the home-front crusade to arm the troops with munitions, warships, and aircraft.

Rosalind rose to fame when a newspaper column which celebrated her outstanding work ethic, inspired a 1942 patriotic song that boosted the morale of the entire nation.

“Rosie” worked the night shift driving rivets into the metal bodies of Corsair fighter planes at a plant in Connecticut, a job that had been previously reserved for men.

An American icon is created …

It was this song that got the attention of the public and inspired the series of famous posters depicting Rosie in the workforce during World War II. While different models were used for several versions of “Rosie the Riveter,” and Rosalind P. Walter may not be “the” Rosie the Riveter in the paintings, she was undoubtedly the first!

This painting became “Rosie the Riveter” to most Americans.

In fact, we should remember that in America as well as other free countries, there were a great many other “Rosie the Riveters” who contributed to the effort to defeat the evil, oppressive Nazi regime during World War II.

To me, these are women to be recognized and admired. These women set the examples our daughters should follow. These women saw a job that needed to be done and decided, “We can do it!”

On an interesting side note, I had a Great Aunt Rosie, who worked at Remington Arms during the war, and was nicknamed “Rosie the Riveter” by her co-workers.

9 thoughts on “Rosie the Riveter, RIP”