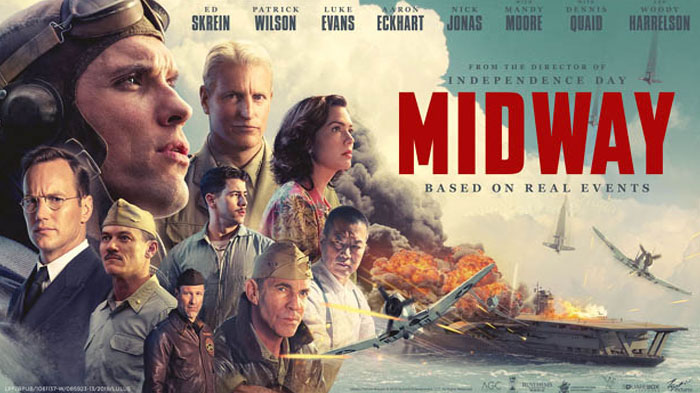 Monday night I went to see Midway at The Carolina Cinemark Asheville theater. I was slightly hesitant to do so since I have always enjoyed the 1976 Midway film staring Charleton Heston. However, it turned out to not be a problem for me. The movies are different enough that I enjoyed them both.

Like its predecessor, this new version of the centers on the historic Battle of Midway fought during World War II. This clash between the badly-mauled American fleet, which had just suffered horrific losses during the Japanese attack on Pearl Harbor, and the Imperial Japanese Navy marked a pivotal turning point in the Pacific Theater during WWII.

This film is based on the real-life events of this heroic American defeat of the Japanese fleet and Admiral Yamamoto’s grand plan to quickly destroy the U.S. Navy in the Pacific. The story tells the tale of the leaders sailors, and pilots who relied on their instincts, intestinal fortitude, bravery (and a good deal of luck) to overcome incredible odds and a Navy force that had them greatly outnumbered and was better equipped.

Many critics seem do dislike the film. I don’t know if it is because they really thought the film was that bad, or if it was because “belittling” American history has become popular with the elite crowd. Here are a few examples:

It’s hard to imagine, if you’ve already seen a film like Pearl Harbor, why you would need to see Midway.

The digitized combat looks like something traced and transplanted from another war, one that took place in a galaxy far, far away.

It has the tone, mostly, of kids’ TV. Or a poor, very poor, supplementary video for a history.

The great appeal of the film are the aerial battles, strengthened by excellent digital effects.

“Midway” tells a story that’s vividly and viscerally rendered, with all the entertainment value of a big, old-fashioned war movie, cutting back and forth between the home front and front line.

I enjoyed the movie. For me, it was a lot like 1965 movie, The Battle of the Bulge with Henry Fonda, which was also short on historical accuracy and plot, but long on entertainment value.

Despite its obvious drawbacks, Midway is a rip-roaring military saga and a testament to the men who fought and won this battle. The Americas are portrayed as being brave and heroic during the movie, and so are the Japanese. Both sides are depicted as fighting for a cause they believed in.

I also thought the mixture of real-life and CGI did a great job in the battle scenes. If anyone has seen tracers fired, especially at night, it can indeed look a bit like a scene out of a Star Wars movie.

I thought the end of the movie was also very well done. You are shown real photos of the real heroes of the battle, along with biographies of them and any citations they received. I was struck with the idea that some of the actors were chosen because they strongly resembled the actual characters they portrayed. Woody Harrelson, in his white hair, looked a great deal like Admiral Chester W. Nimitz. I thought Dennis Quaid also looked a lot like Admiral “Bull” Halsey.

This film really stirred the patriotic blood in me. And, not just for America’s victory at Battle of Midway, but for the sacrifices all our brave fighting men and women have made for our country throughout its history. Maybe that is why some of the critics didn’t care for it.

If you like military history, or military action adventures or action thrillers, check out Serpents Underfoot, available online at Amazon.com, Barnes and Noble, and Books-A-Million. Click here to read more interesting blog posts and reviews!