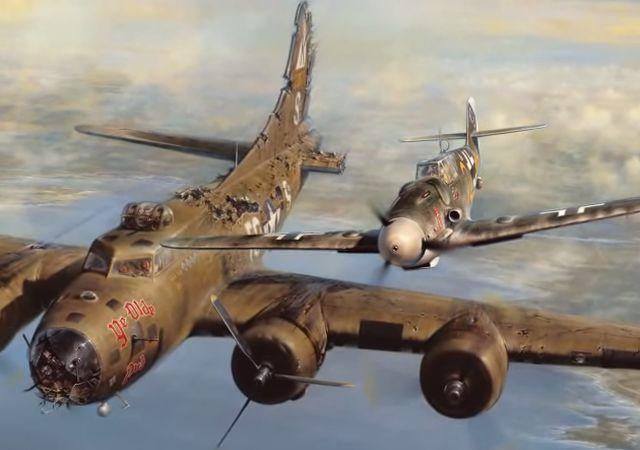 Read an incredible story of courage, combat and chivalry during World War II that will quicken your pulse, give you a strong sense of American pride, make you chuckle, and then bring a tear to your eye!

Higher Call: An Incredible True Story of Combat and Chivalry in the War-Torn Skies of World War II

A “beautiful story of a brotherhood between enemies”* emerges from the horrors of World War II in this New York Times and international bestseller.

December, 1943: A badly damaged American bomber struggles to fly over wartime Germany. At the controls is twenty-one-year-old Second Lieutenant Charlie Brown. Half his crew lay wounded or dead on this, their first mission. Suddenly, a Messerschmitt fighter pulls up on the bomber’s tail. The pilot is German ace Franz Stigler – and he can destroy the young American crew with the squeeze of a trigger…

What happened next would defy imagination and later be called “the most incredible encounter between enemies in World War II.”

The U.S. 8th Air Force would later classify what happened between them as “top secret.” It was an act that Franz could never mention for fear of facing a firing squad. It was the encounter that would haunt both Charlie and Franz for forty years until, as old men, they would search the world for each other, a last mission that could change their lives forever.

It is almost impossible to describe the range of emotional responses reading this story invoked within me. As a patriotic American and the great-grandson of German immigrants to America, this story touched me on many levels.

This is the story of two men, pilots in their respective country’s air forces, meeting in a chance encounter in the skies over Germany.  This meeting would eventually go down in history as one of the most amazing tales of World War II.

I stayed on the edge of my seat reading this story. It was very hard to put down even when I needed to. It was like I became Lieutenant Charlie Brown and the fate of  ‘Ye Olde Pub” and the B-17’s crew was in my hands.  I also became the pilot of the ME-109, torn between my humanity and the orders of the Nazis government that I secretly despised. We do not hear the words combat and chivalry used in the same sentence these days.

I became totally engrossed in the characters on both sides! This book made me wince. At times it made me chuckle. In addition, this story tugged at my heart and there were several times it even brought a tear to my eye.

If you enjoy military history, this book is an absolutely must read. It is rare that we get to glimpse such an amazing spark of real humanity in the awful chaos that is war. It truly is a story of combat and chivalry!

Check out my novel, Serpents Underfoot!