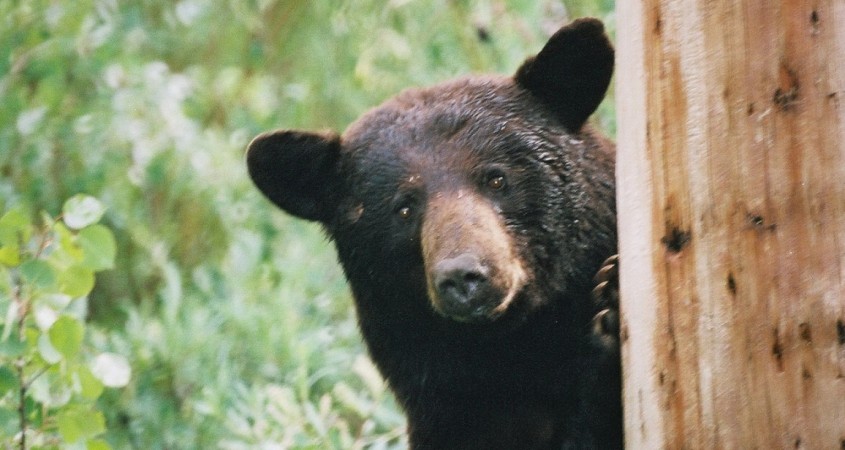 Bear Tales from the Adirondack Park

It was dark at the Golden Beach Campground! When the lights go out in the Adirondacks, it gets pitch black. A twelve-year-old girl squirms in her sleeping bag. Her mother had warned her not to drink that last bottle of Coke Cola before going to bed. She had not listened, and now she had to use the bathroom!

What time is it? She wondered. Can I make it until morning? She did not think she could. Working quietly, trying not to wake her parents or her older brother and younger sister, she got herself ready. There was little chance of waking them, as her father was loudly snoring away. All four slept blissfully unaware. The cool Adirondack nights did make for great sleeping.

Reaching for the flashlight, she kept on the floor of the tent by her sleeping bag; the young girl turned it on. Careful not to shine it in anyone’s face, she unzipped the zipper on the side of her sleeping bag and crawled out. First, she put on the plaid flannel shirt because the night air was quite chilly outside her warm sleeping bag. Next, she reached for the beaded leather moccasins her mom had gotten for her on their last trip to the gift shops in Inlet.

Making her way to the front flap of the big cabin tent, she unzipped the mosquito netting, stepped out, and zipping the netting back; made her way down the path toward the women’s bathrooms. It was a short walk, maybe fifty yards. Golden Beach Campground had several men’s and women’s bathrooms and shower houses strategically located throughout the campground. Golden Beach Campground was a great place to camp. Their family had been camping there for years.

The girl made her way along the path, the beam of the flashlight projecting its circle of light on the ground a few feet in front of her. She was about halfway to the women’s bathroom when she froze. There, clearly defined in the circle of light from the flashlight, were two large black paws. The paws were attached to two somewhat furry black legs. Not panicking, the young girl tilted her light ever-so-slightly upward. Standing in the path a few feet in front of her, clearly framed in the light of her flashlight, was a rather large black bear!

Carefully, the girl lowered the light again until only the bear’s paws were visible. She slowly began to back up a step at a time while keeping the bear paws in the circle of light so she could see if it moved. When the beam of light could no longer reach the bear’s paws, she turned and made her way swiftly back to the tent. Quickly unzipping the mosquito netting, she stepped inside and zipped it shut. In a few minutes, she was back in her sleeping bag, listening to her father snore.

She decided she could wait until the morning after all!

If you did like this Adirondack Bear Tale, then stay tuned for future installments, and check out my novel here!