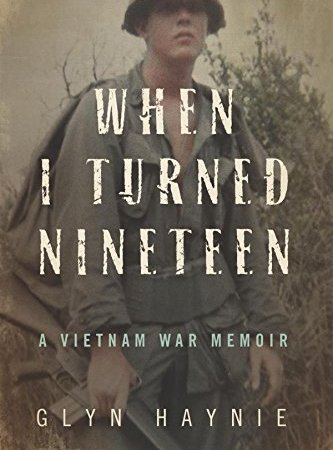 A review of When I Turned Nineteen: A Vietnam War Memoir by Glyn Haynie

The Vietnam War was an unpopular war. This war memoir gives a young soldier’s view of that unpopular war in a way that really touches the reader. The narrative is engaging and well written in a format the non-soldier can easily understand. The photographs are also fantastic and add greatly to the feel of the narrative. The author is fair and non-judgemental in his recounting his experiences. But, the reader can feel the fear, frustration, resentment, and anger that grows … seeing friends killed in a war with no clearly defined mission or purpose, and a war that, in the end, they are not allowed to win.

When I Turned Nineteen: A Vietnam War Memoir chronicles Glyn Haynie’s long journey as a nineteen-year-old that was sent by his country to fight in an unpopular war. In 1969, Haynie served with the U.S. Army in the First Platoon Company A 3rd Battalion/1st Infantry Regiment 11th Brigade Americal (23rd Infantry) Division. Haynie eloquently tells of his experiences in a manner that is easy to read and understand. Almost any reader can identify with and connect with the narrative. Whether running all-out to escape a jungle fire set by artillery fire on a hill they had just choppered in to or being blown into the air by a command-fired 250-pound bomb, or even a weekend of R&R in Bangkok, Thailand; the reader will enjoy the narrative and identify with the characters.

A Detailed and Cohesive Narrative

Author Glyn Haynie tells his story in a cohesive and easy to read style which is easy to follow even for those not familiar with military jargon and history. I also loved how the author used letters provided by other platoon members and their families to flesh out and add variety to the narrative voice. I highly recommend this book and give it 5 stars!

6 thoughts on “When I Turned Nineteen: A Vietnam War Memoir”