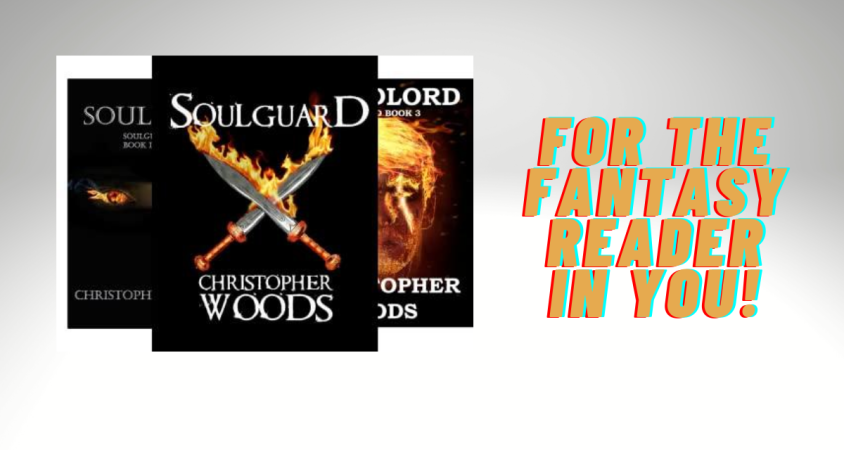 I had the pleasure of meeting Christopher Woods at McKay’s Used Book Store in Knoxville, Tennessee a few months ago.

A science fiction / fantasy author, Christopher Woods was holding a book signing for the newest installment in his series of five SoulGuard books.  Since I was also an aspiring author, I stopped by his table to chat for a few minutes. Christopher Woods was very gracious and even shared a few pointers that he had picked up along the way to becoming a self-published author himself. I figured the least I could do then, was buy one of his books in appreciation for his being willing to share a few tips.  So, I bought a hardcover copy of the first book in his series, titled SoulGuard, which Mr. Woods kindly autographed.

Over the last few weeks, I finally got around to reading his book. I must admit, upfront, that I am not a big science fiction / fantasy reader.  I typically prefer genre’s such as historical fiction, or spy novels and political thrillers.  This is probably why it took me so long to read it. But, this book was a pretty darn good read!  I cannot say I have been “converted,” but I probably will read the rest of the series.

This first installment centered around the main character, Colin Rourke, who has been doggedly hunted his entire life by a race of creatures known as Demons.  Demons  travel through portals to our world to kill or capture and enslave our people. The Soulguard, a mysterious warrior group  with knowledge of how to harness and use the power of the Soul to combat these demons, wage a secret war against them to protect the people of our world.

Colin, who is special, has been kept hidden and raised in secret by two legendary Soulguards. He has now reached the age where he can take his place in their ranks and help protect the people of our world. Colin has abilities that have not been seen a very long time (at least a thousand years) and his very existence has the potential to start an all out war with the Demons who are desperate to destroy him.  This war could quickly evolve into a holocaust that threatens to destroy our entire world.  Only Colin and the Soulguard have any chance of stopping what is coming.  Will they succeed?  Or, will our world become enslaved by this race of Demons?

I did enjoy reading this first book in Christopher Woods’ series! It is a great story with darn good dialogue. The action is fast paced throughout the book and keeps things moving nicely. The interaction between characters is nicely done. The character development is pretty darn good. I especially enjoyed the interesting thread of humor throughout the dialogue, but then … I do have a strange sense of humor.

My only complaint is that, for me, there could be a bit more development around the SoulGuard and their training or development and use of their “Soul” power.  But, that may just be the martial artist in me … I like the long-suffering, dutiful warrior arts training scenes! I guess not everyone needs that. I just think that would be interesting for me and perhaps, add just a bit to the story line.

All in all, I think this is a great first book in the series and would definitely recommend it to anyone, and especially those who really enjoy this genre!  As I stated earlier, despite being a genre I do not typically read, I will probably read the rest of the series before I am done.  It is available from Amazon Books.