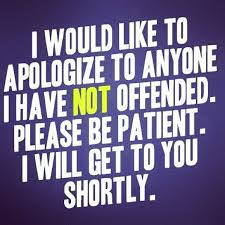 I am totally disgusted with all you disingenuous America haters … jumping on the bandwagon and protesting this temporary freeze on immigration from 7 countries with a rich history of hating and murdering Americans. Unfortunately, this list of disingenuous haters now seems to also include Glen Beck and The Blaze, and The Daily Beast!  Is there no journalistic integrity left in the American press at all?  There are a few real facts you need to consider before spreading your lies and spewing your hate!  Okay, maybe that is too harsh … but you could at least check your facts!!

First, the Special Immigrant Visas (SIVs) for Iraqi and Afghan Translators that left-wing ex-military groups are now screaming about. That process has always been broken.  It took the Iraqi translator who worked with U.S. Navy SEAL, Chris Kyle, who know goes by the name Johnny Walker, five years to get through the process.  Do the math!  President Trump has been in office 11 days!  Pete Hegseth, a former executive director of Vets for Freedom and now Fox New contributor has fought for years to bring Iraqi and Afghan allies of his over under this program.  He has talked to and argued with the State Department and many Senators with no success.  Again, Trump has been in office 11 days!  Did you consider that a review of this process might actually include fixing this Special Immigrant Visa program which has been broken since it was put in place in 2009?  Of course not ….

The State Department stopped processing Iraqi refugees for six months while Barack Obama was President and Hillary Clinton served as Secretary of State.  This included Iraqis who had helped U.S. Forces as interpreters and intelligence assets.  This was reported by ABC News in 2013.  ABC News also reported that, as a result of Obama’s BAN ON MUSLIMS, an Iraqi who had aided American troops was murdered before his refugee application could be processed.  This was a direct result of the immigration delay!  Where was your indignant, moral outcry then?

One of the first Iraqi interpreters for the U.S. military detained under Trump’s executive order, Hameed Darweesh, has already been released under an exemption in the order! While certainly not identical, President Trump’s policy is similar to what President Obama did in 2011 when he banned visas for refugees from Iraq for six months.  The seven countries listed in President Trump’s executive were previously identified by the Obama administration as sources of terror.

2 thoughts on “Get Real … the Special Immigrant VISA program has always been broken!”