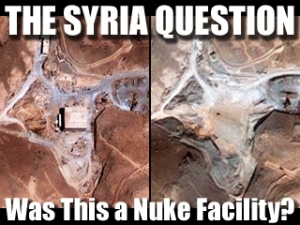 Looks like President George Bush may be getting a little vindication after all the fuss liberals made out of his “Axis of Evil” comments about Iran, Iraq, and North Korea and their support of terrorism and pursuit of weapons of mass destruction. John Bolton, then United States UN Ambassador, when beyond the “axis of evil” to include by including Libya, Syria, and Cuba in this group.

U.S. intelligence officials will show members of Congress a videotape and other supporting evidence to prove their case that Syria was building a nuclear reactor with North Korean assistance. Those gutsy Israelis bombed the site in September 2007 as a preemptive national defense measure.

Intelligence officials claim the evidence is very clear and compelling and that it comes from a variety of sources, and … not just Israeli intelligence.

It seems that Syria had not reported the site to the International Atomic Energy Agency nor was it under international safeguards, possibly putting Syria in breech of an international nuclear nonproliferation treaty. Why would they act this way if it were legitimate and non-military in nature? Maybe we should ask Nancy Closing … she is on great terms with the Syrians.

Plutonium-producing reactors are of international interest because plutonium can be used to make high-yield nuclear weapons … and we all know how liberals like fight for the right for terrorists to build their own nuclear weapons.

96 Border Patrol Officers have been killed by violent criminals coming here to “do the jobs most Americans won’t do.” 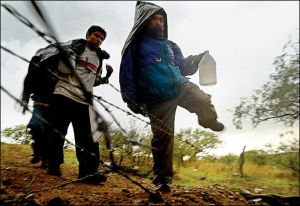 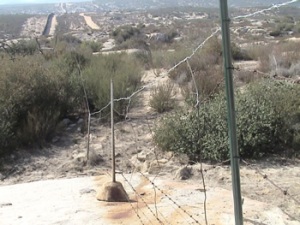 These photos show how easy it is along many sections of our southern border to cross into this country. Are these the footprints of a terrorist, a drug smuggler, or just some hard working hispanic families? The real problem is, we have no way to know who they are or where they’re actually from. They could just as easily be Al-Qaeda or Hamas terrorists as they could be hard working Hispanic families! … how would you know? …. how can you tell?

While generous budgets are allotted to massive social service programs to support these illegal immigrants, our national security is literally left wide open. Millions have crossed in remote places such as these while many of our elected representatives have ignored the problem to get re-elected,  bowed to anti-American political pressure, or even worse … knowingly looked the other way.

It’s time for those who have benefited from this influx of cheap illegal immigrant labor and the government agencies who cater to these illegal immigrants be brought to task by the American people … the interest and security of the United States citizens should always be first consideration of our government.  That was the founders point in creating a federal government to begin with.

For an accurate real time count of the illegals crossing our borders go to ImmigrationCounters.Com

This disturbing video clearly shows illegal alien children freely crossing a US Border Patrol Checkpoint in Arizona to attend US public schools. Now, I am not advocating persecuting or prosecuting children … but where do it all end?  School bus service, free breakfast and lunch programs and a full range of public services are provided these illegal alien children. Could it be the fact that school budgets are based on attendance levels, that the school district or their teachers union mind this situation at all? This same kind of scenario is being repeated across our nation every day …. at the expense of our children.

This telling video exposes statements made by some of the leaders of the illegal alien movement, many of which are our own elected officials and academic leaders. Why are these individuals fostering such division and anger in a country that has traditionally welcomed legal immigrants. Many of their statements are outright falsehoods, but then again liberals have never let the “facts get in the way of a good story.”  The fact is that the Mexican government’s ceded the barren and undeveloped border land to America for $15M in the “Treaty of Guadalupe” and in return , the U.S. forgave all the Mexican debt owed America. Here’s a link to these historical facts; http://en.wikipedia.org/wiki/Treaty_of_Guadalupe_Hildalgo .

These individuals are simply trying to blur the lines between legal and illegal, to dismantle the borders to create a new voter base for themselves.

Americans have nothing against LEGAL IMMIGRATION, we all immigrated here from somewhere else! But the unchecked influx of illegal immigrants, many of them criminals, if having a disastrous effect on our country, its economy, and our national security …. it must be stopped. Contact your Senators and Congressman … let them know where you stand!